Before I get too far into a lot of related posts, I figured I really should dedicate a post to explaining and showing what compound interest is. My first memory of when the concept of compound interest really stuck was in my high school economics class. My teacher (Mr. Danielson) was phenomenal and made almost all the topics in the class interesting, but the one that I remember fondly was compound interest. He would regularly say that “compound interest is the 8th wonder of the world” which many credit to Albert Einstein (although the internet also has accounst from a physicist who studied under Einstein that said he never said it). Einstein was a genius on many levels so I guess it’s easy to credit him with such sayings, but we’ll just enjoy these quotes for what they say and not who said them.

“Compound interest is the eighth wonder of the world. He who understands it…earns it, he who doesn’t… pays it.”

“Compound interest is the most powerful force in the universe”

After 20+ years of saving and investing I can now see that these quotes have a lot of truth to them. Yes, there can be a bad kind of compound interest (e.g. consumer/credit card debt) but I wanted to focus on the positive side of compound interest for now. We’ll have opportunities in the blog to discuss how debt interest, when not controlled, can run away and strain your financial well being.

So what is compound interest and why is it so powerful? Everyone usually likes to go to the dictionary first, so Merriam-Webster simply defines it as: interest paid both on the original amount of money and on the interest it has already earned. So the beauty of compound interest is that you are earning interest on gains from the previous period (year) and then each period (year) you continue to add interest to what you’ve already received in interest. This is a great concept! Without this principal, it is hard to believe that people could save for retirement, save for a car purchase, save for college or just about anything that requires several months or years to amass funds.

I would also say though that without time on your side, the true power of compound interest cannot be fully realized. Time is really the fuel that propels your savings and investments to the higher balances that we all want to see. Compounding interest over 10 years is great but compounding over 30 or 40 years is even better. So, for example if you start saving for retirement early, you’ll get 30-40 years of compounding, but if you start saving later in your career, you can still get great compounding as long as  you bump up your savings rate to meet your retirement goals. The main point is that compound interest is required to make any of this happen.

The two small tables below show how getting simple interest is not as lucrative as getting paid compound interest. With a simple interest rate you receive the same amount on the initial investment each year, so in this case it pays the same $50 each year and grows to total $1450 after 10 years. The compound interest rate pays the 5% on the initial investment and the amount of the previous interest payment each year, so it pays $50 the first year, then $52.50 in year two and so on. The cumulative total in the compound interest example is $1551.33 or $101.33 more. This is just a 10 year example with a relatively small starting number, so just wait until you see larger sums like $100,000 or $1,000,000 when they get compounded. 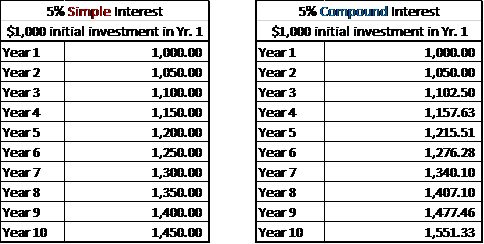 Since the fuel that propels compound interest is time, let’s look at two different examples that show 10 consecutive years of investing with compound interest and the difference when you have several years to let it grow. Both scenarios involved investing $10,000 a year for 10 years at a 5% compound interest rate. Scenario 1 (blue line) starts the 10 years of saving at age 20 and ends at age 29 but lets the balance grow at a 5% compounding rate until age 65 (with no additional input by you). Scenario 2 (orange line) shows how starting at age 56 and saving for 10 consecutive years at the same rate through age 65 will grow.

But, don’t dismay if you don’t have 40 years to save for retirement. In a shorter amount of time, you can still save a large sum, as long as you increase the amount you are saving. So, in the example above, maybe you save $20,000 per year instead of $10,000 to make up for some of the lost time. As the adage goes, there is more than one way to skin the cat and we’ll even explore those ways in future blog posts as well. 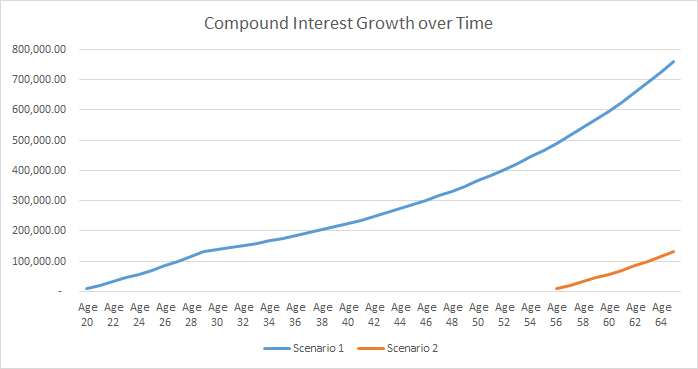